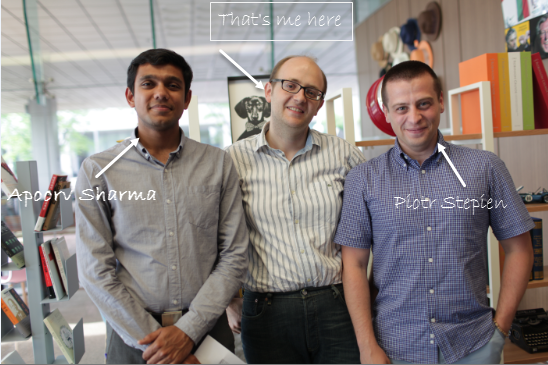 Those years in South Korea have been the toughest of my life, but at the same time, I learnt to become a leader for my team…and this lesson is not something I couldn’t have possibly learnt from any book.

You see…you can read everything you want on paper, but as long as you don’t experience it, this knowledge doesn’t get integrated into your thinking and doesn’t get applied.

Before being a leader, I didn’t really make the difference between a leader and a manager… I didn’t know that the gap was so huge.

I used to read those “Great leaders do this, bad managers do that” kind of articles… but those article are generally just written to attract the attention with few bullet points rather than really describing what it feels to be a leader.

Here’s what I learnt about leadership, the reality behind the scene:

This is the most important of everything I will write in this article…so If you have to remember only one thing, remember this:

Trust in the leader is the reason why people will open to you and tell you what they think, their dreams, their aspirations, their daily challenges.

Creating trust with your team members said in simple terms is very similar to becoming their intimate friend, coach and confident.

(If you don’t know what is a trusted advisor, watch this video from Jay Abrahams )

This problem with trust comes from one simple reason… most people don’t know what is trust, but they don’t want to admit it… people, and especially engineers, are prone to say “I know, I know” without ACTUALLY knowing. Is it so hard to admit that there are some things that you don’t know?

Is it so hard to admit that there are some things that you don’t know?

The world is huge and there are MANY things that I don’t know.

I am telling all that by experience because me too, at the beginning I did this exact mistake.

I was seeing my team members having difficulties and then I was “assuming”, that’s because of THAT.

But you know what?

I was wrong… people never think the same thing than I was thinking.

So what did I do?

I started to read so many books that I cannot even count how many of them I read in one year time… I started to read all the big names that I could put my hand on, Peter Drucker, Dale Carnegie, Jay Abrahams, Tony Robbins, Robert Greene, Napolean Hill, Brian Tracy, Ramit Sethi, Seth Godin, Gary Halbert, Carol Dweck, Chet Holmes, Joseph Sugarman, Mark Divine,… and I am far from telling all the names.

This is a simple truth but crucial:

People only learn from the people they trust will bring them more happiness, chance, challenge, opportunities, joy, … and they can trust you only if you are honest with them and always tell the truth, whatever happen.

You can be the most talented leader in the world, but if your team doesn’t believe in you, you are just a nobody.

You need people’s trust as a leader so they open up to you, to your ideas, your coaching…and by trusting you they will get incredible benefits from it.

Being a leader means being able to change people’s lives by leading them on better tracks, opening them to new horizons that they would never have been aware without you.

Trust is what creates the will to believe in what you are presenting them. Trusting you gives them the power to go through sometimes difficult challenges.

There is trust and BLIND trust.

When people trust you only because the gap of competence between you and them is huge, them it means that there are trusting you blindly.

This kind of trust is dangerous because it is not based on your real skills or competence, it is based only on people’s beliefs that you are a very talented people.

Trust should be based on solid facts that demonstrate to your team and your company that you are the right leader to accomplish everything you state and lead them to greatness.

2- How do you become a trusted advisor leader?

Well… as everything… the first thing I learnt is that I should first look into myself and accept the fact that I was not as good as I wanted to think I was.

I had to accept my shortcomings and the mistakes I did first before anything else to understand that I had to actually learn to become a “trust advisor” rather than just a Tyran.

Which means that everything you do is transpiring through your actions as a leader, and not in what you say as a leader.

If you say something great, but you do the contrary, you are not creating trust, you are just lying to your teammates and they can understand it clearly.

So I had to be open to accepting and correcting my own mistakes before I was actually able to be a leader.

To do that, the best way was simply to tell about what I did wrong in the past, the experience I took from it and what I learnt.

I honestly opened my heart about the excruciating failures that made me the person that I am today and my teammates started to open and tell me that they felt exactly the same.

I started by “Why I became an Engineer” and I shared the true reason behind my motivation and passion for what I am doing every day.

After doing that, I realized that this transparency and honesty is the kind of thing that everyone has inside himself and those failures are not failures but transformative experiences that made me who I am.

Those stories resonated with my team and deepened the bond between us.

I understood then that people all have similar failures in their lives and telling your own failure stories were an effective way to resonate with them and construct a link that will lead your team members to respect you and trust you.

Because of those failures that I had, I learnt to stand up and believe in what I am doing every day and I was able to create value for me and for the world.

Once you start to resonate with your team, that’s when they start to believe in you and that’s when you become a trusted advisor able to lead them into greatness.

3- The most important skill a trusted advisor leader should have

To be a leader, people will tell you that you will need thousands of skills… and that’s maybe true, but I found that there is a skill that was more important than any other skill to become a trusted advisor leader.

This skill is called “listening” skill.

Now… IF you are thinking in your head: “Duh… that’s easy, I am a great listener already”

being a good listener doesn’t mean that you have the ability to hear.

It means something else, very different.

It means that you have the ability to:

1- Close your mouth every time you listen to someone

5- Accept the things that this person is saying without judging first, and then apply logic and thinking to decide a conclusion

I realized that some people are just thinking that whatever they have in their head is the absolute truth and whenever someone is telling them something, it just bounces back as if they didn’t even considered your idea. Those people can fake that they are listening and they can even deceive themselves that they are…but they are not.

Too much self- confidence creates blind trust in yourself and blocks the external ideas you receive.

Always stay open to external ideas. No one is perfect. There is always something to learn from someone else.

Now that’s your time to speak…

Do you have some similar experience with leadership? Do you have a different view?

Let me know, I would be glad to reflect on it and integrate your ideas if they can complete mine.

One thought on “How do you become a trusted advisor leader?”